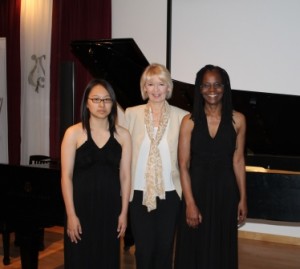 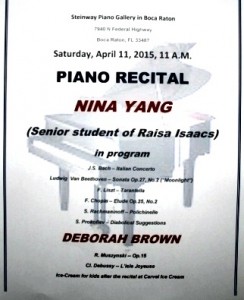 Nina Yang, a student of Raisa Isaacs since 6 years old, is a senior at the high school and prepares for her Ass. Diploma at the Royal Conservatory Music Development Program that has been established as the National Standard in USA for pre- college education since 2012 (The program has recently celebrated the partnership between the Lang Lang Foundation and The Royal Conservatory Music Development Program).The program requires performing a solo recital with varieties of musical styles. She performed her recital at the Steinway Piano Gallery in Boca Raton on April 11.

Through years of piano studying Nina has been a diligent piano student and received many awards and recognition. She has been Superior graded in the National Federation Music Clubs Festival for 9 years and received many trophies. She has won NFMC Summer Scholarship as the best in categories 8-12 grades as well. She is a winner of the International American Protégé Competition in Romantic category and was honored to perform at the Carnegie Hall. She has been selected for master classes with the leading pedagogues of US and made a recording at the Steinway piano Gallery in Atlanta on the Van Cliburn grand piano. Recently she received a diploma in participating in the International Competition “Enkor” as one of the winners. She has attended International Instrumental Academy in Cremona, Italy where she studied with the team of internationally renowned pianists last summer.

Since Raisa’s move from Atlanta to Boca Raton in summer 2014—Nina Yang and Deborah Brown have been successfully continuing taking piano lesson with her teacher online, by Skype.

Ryan Rao – one of the Winners of the International Enkor Competition 2018.

If you can’t find answers to your questions, please contact your piano teacher directly at risaacsmusic@yourpianoteacher.com or Call 770 650-9139
Boca Raton, FL